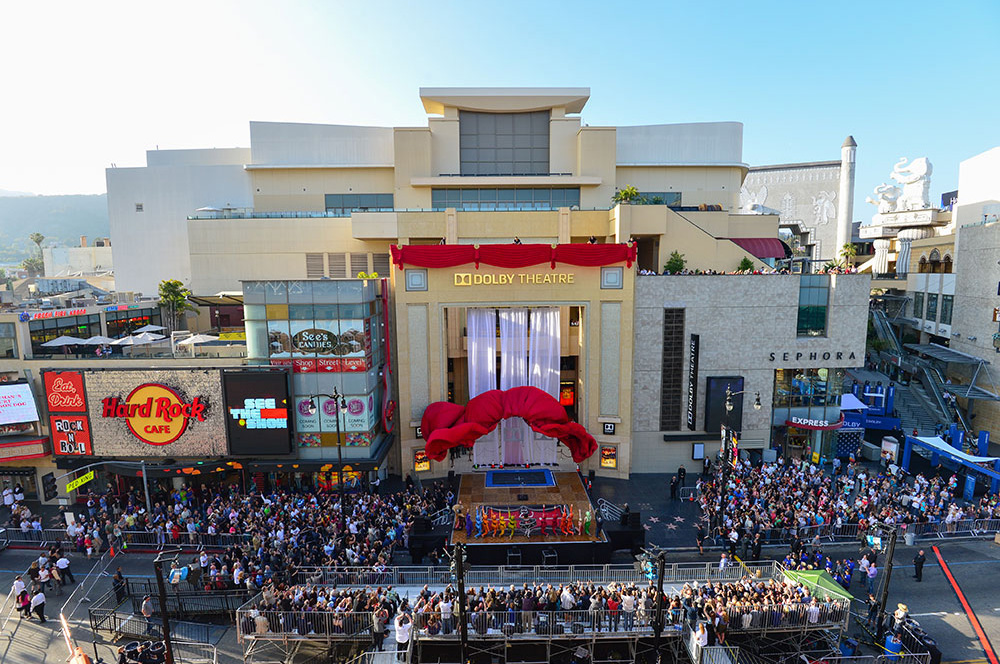 ABOUT THE DOLBY THEATRE

The theatre is equipped with Dolby Atmos® cinema sound playback—the most natural, lifelike sensory experience available in a cinema. Complete with 215 individually powered loudspeakers, the Dolby Theatre features one of the most sophisticated sound systems in the world.

The theatre is equipped with Dolby Vision® projection technology—delivering incredible color, a million-to-one contrast ratio, and twice the brightness of standard screens.

We've been working with talented filmmakers to create unforgettable movie experiences for more than 40 years. From the cinema to the living room, Dolby continues to transform the entertainment experience, and the Dolby Theatre reflects our ongoing commitment to helping moviemakers realize their visions.

For the theatergoer, the Dolby Theatre experience begins on Hollywood Boulevard, where a towering portal, designed by Rockwell, serves as the grand entrance to the theatre, which is set back from the street. A two-story Awards Walk, featuring backlit glass plaques for each Best Picture Oscar® winner on a series of limestone portals, leads up a sweeping staircase with red mosaic tile to the main entrance.

The audience chamber is highlighted by a silver-leafed “tiara”, a striking, looping oval structure that both supports and disguises an immense ceiling grid for lighting. Reflective ribs from the tiara extend down between the theatre’s box seats, creating a continuous flow from wall to ceiling. The chamber was designed to draw attention to the action on the stage, as well as to achieve maximum intimacy between the audience and performers. It is appointed with sumptuous details that give the space warmth including cherrywood finishes and deep plum upholstery, as well as a shimmering glow provided by curtains of two shades of iridescent fabric and a fine bronze mesh that stretches to the top of the proscenium, which measures some 64 feet wide by 35 feet high. The main stage area is one of the largest in the nation, at 120 feet wide and 75 feet deep.

Wolfgang Puck Catering and Events, owned by celebrated chef Wolfgang Puck, is the exclusive provider of food and beverage services for Dolby Theatre, including front-of-house, backstage, and special private events that can be held in the theatre lobbies and the Dolby Lounge.

Guided theatre tours are offered with production and performance schedule exceptions.  Please refer to the Tour Schedule for availability. The walking tour offers visitors architectural and historical highlights of the world-renowned venue, as well as a glimpse of the ultra-glamorous side of Dolby Theatre on Hollywood’s biggest night – the Oscars®.

Dolby Theatre is located within the Hollywood & Highland, which consists of over 640,000 square feet of space featuring national, regional and local retail tenants, a variety of restaurants, several of Hollywood’s hottest nightclubs, a six screen state-of-the-art cinema adjacent to the world-famous TCL Chinese Theatre (formerly known as Grauman’s) and the 640 room Loews Hollywood Hotel. CIM Group, an integrated, full-service real estate investor and operator based in Hollywood, became the owner of Hollywood & Highland in February 2004.